All Collections
Employees' Area 📱
FAQ
Why my app has been updated?

Why my app has been updated?

Welcome to the new version of the Happyforce App

Written by Daniel Castro
Updated over a week ago 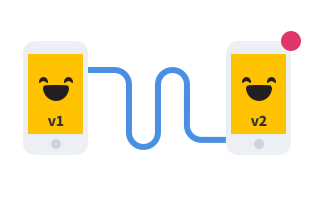 Why updates are need?

Happyforce is continuously evolving by adding new features, improvements based on the suggestions received by you. The only way to make them to arrive to you, is by updating the app.

For that reason, you will see new updated of the app from time to time.

Our recommendation is that you keep the Happyforce app updated to the last version in order to be able to access to all the new improvements and features.

We suggest you to activate automatic updates on your device to always have the last version.

Why some of my colleagues have differences in their apps?

The main reason is that you or your colleague have a different version of the app installed on your devices. That can happen because of one of the following reasons:

What is progressive deployment?

The Happyforce app is compatible with many devices. For that reason and by following the best practices in mobile app development, when we release a new version of the app, we do it incrementally in order to be able to detect early any problem.

That means that when we release a new version of the app, the update only appears during the first days only to a 10% or 20% of the Happyforce app users.

Did this answer your question?